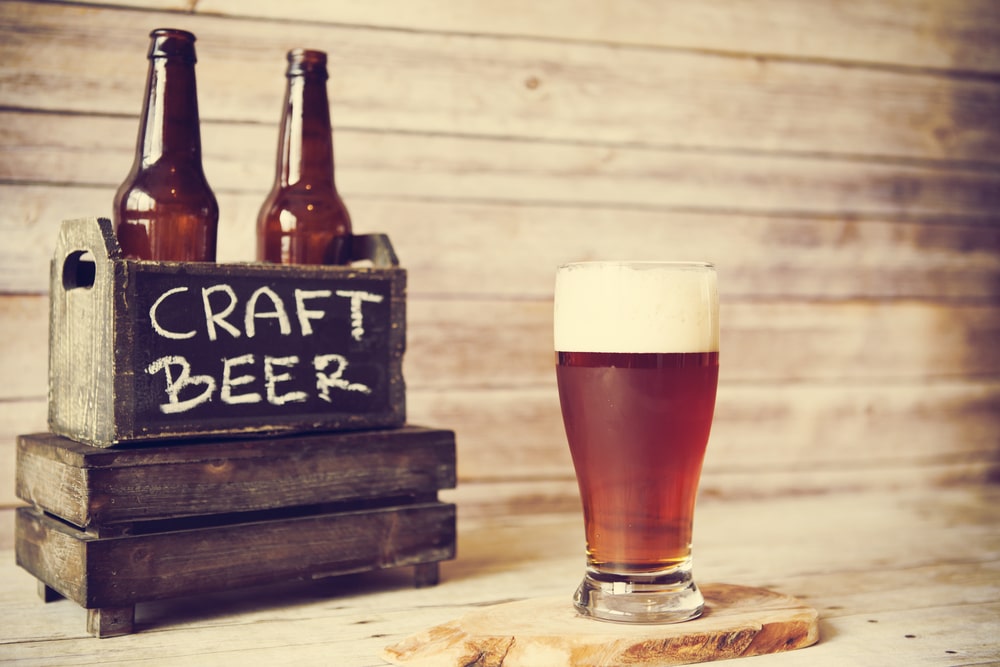 Below, we have compiled a list of 10 of the best craft beers made on the Sunshine Coast by the many amazing breweries. These beers include ales, lagers, and IPAs. For those of you who don’t drink beer, we are sure that once you have these bangers, there is no turning back.

Golden Ale is the flagship craft beer offered by Boiling Pot Brewing Company. It has a smooth and tropical flavour to it. Golden Ale is the perfect beer to be had whether you are on the beach or you are back home after a tiring day at work.

Boiling Pot Brewing Company has different flavoured beers available that they brew in-house. With a lot of variety on offer, customers can choose from the different options. Even if they are unsure, there are mixed packs available that let the customers try multiple options at once.

Located in the heart of Noosaville, Boiling Pot Brewing Company was founded by John Scott Madill, a Noosa local. The brewery has a taproom where visitors and locals can directly get the beer from the source. It is well known for the amazing variety of beer produced and its friendly staff.

The Juicebox beer is a New England Style IPA and boasts of having the flavours of breakfast juice with aromas of tropical fruits such as mango, lychee, candied pineapple, and passionfruit. There are oats and triticale that curve the pine notes and provide a viscous mouthfeel. It is highly recommended for the summer season and is extremely juicy – a delight indeed!

Land and Sea Brewery offers a wide range of beers available all year round. Also, they are known for crafting some exquisite seasonal or limited release beer, keeping both visitors and locals on their toes.

About Land and Sea Brewery

Land and Sea Brewery is a unique brewery in Noosa who have taken their inspiration from the sea and create their beer creating a balance between science and creativity by using only the local ingredients and the sunshine keeping the nature in mind.

While the region of Noosa is famous for all kinds of ales, Heads of Noosa Brewing Co. specialises in brewing some of the best lagers available on the sunshine coast. These are fermented colder with a delicate balance of taste. The two most famous lagers are the Japanese Lager and the Summer Dusk. While the Japanese Lager is filtered to give a crisp and clean mouthfeel, the Summer Dusk is exploding with colours as it is made from dark malts that are balanced with flavours and aromas of tropical fruit hop.

About Heads of Noosa

Heads of Noosa is an independent passionate brewery that is located on the Sunshine Coast in Noosa, Australia. Their unique and tasty beers are a result of their interest and passion for lagers and which helps them produce some interesting and enjoyable beers for everyone who comes to them. The beers created by them are inspired by the rocky headlands and the Pacific Ocean. Their main focus has always been on quality using natural ingredients and brewing them fresh.

The Hazo IPA is the inaugural collaboration beer and also the winner of the Noosa Home Brew Club vs Sunshine Coast Amateur Brewers (SCABS) ANZAC IPA competition. It is a hoppy tap with coppery-gold colour. The taste is a hefty bitter one and it is a full-bodied beer. The late addition of hops is essential in bringing out the flavours and aromas of stone fruit and tropical fruits at the onset, while the resinous characteristics take some time to get noticed.

There is a wide range of core, seasonal variety, and collaborative beers available at any time of the year. A minimum of 6 different beers is available on the tap.

Noosa Hinterland Brewing Co. is located in a building that is heritage listed that is of historical value as it operated as a sawmill, a workshop to pre-cut houses and Alfred’s joinery in the hills inviting people to enjoy a cold crafted beer. Here in this unique brewery, you can find a lightning bicycle above your head. The interesting part about the brewery is that the beers are crafted in small batches here allowing you to see the fermenters and the brew kit live.

The Copperhead Restaurant Brewery is a microbrewery and offers 7 session-able tap beers and an additional batch of 7 experimental beers that change with the season. Their beers are unfiltered and 100% pure as there are no preservatives or fining agents added to them.

About Copper Head Restaurant and Brewery

Copper Head Restaurant and Brewery is a combination of a brewery and a restaurant also called a Brew Pub. It is located in Cooroy and the main focus of this combination is on both food and beer which is only to be consumed on the premises with no exception to quality. They also offer à la carte meals and can be booked for any special occasion such as a wedding.

Debbie’s Cousin is a blonde ale with 4.2% ABV and uses the malt profile of Sunshine Brewery’s award-winning Debbie Session Ale. The hop profile makes use of Eclipse hops, a newly developed Tasmanian variant. This gives the blonde colour with tangerine aromas to the beer.

Sunshine Brewery has crafted 64 different beers over the last 5 years. While some are their regular offerings and are available all year round, others are limited editions or are seasonal.

Conceived in May 2015, and given birth to on 24th November 2015, the Sunshine Brewery is a fairly young brewery located in the Sunshine State, Queensland. They brew fresh beer using locally grown products that can be traced to their producers. It is open for both tasting cellar doors and wholesale supplies. There are even food vans available on-site on Thursdays, Fridays, and even some of the weekends. Sunshine Brewery is a combined effort of Craig Dundson who is a passionate surfing skeg and the chief brewer and Darlyle Cook who heads the business and is passionate about travelling and good food. Their beers are inspired by different things and experimentation. With learning and experimentation, they have an inspirational story.

This lager beer is lightly malted and has a crisp dry finish. It features spicy noble/mild floral European hops and is made using only two grains – pale malt and wheat, and a single hop – the noble hop Saaz. It has a gingery taste and sweetness similar to honey.

Terella Brewing has 6 different canned beers available for purchase and delivery. This includes a mix of lager, ale, and IPA. Terella Brewing is currently working on brewing some more varieties of beers that will be available in the coming few months.

Terella Brewing is an eco-friendly farm-style brewery located in the rural landscape of North Arm. It has been co-founded by Torren Read and Brandt Bamford with a highly sustainable model and it sees the integration of the brewery with a Vertical Farm system. This allows Terella Brewing to use the water created by the Vertical Farm system and the Co2 released during the fermentation of the beer is re-injected into the Vertical Farm for better growth of organic produce.

The Liquid Metal beer by Blackflag Brewing is a black IPA 7.2%, brewed using Centennial and Cascade hops. There is a very familiar and subtle resin finish found in Americal beers with hints of pine. The beer offers a session-able feel with large-bodied trimmings.

There is a decent range of different varieties offered by Blackflag Brewing with IPAs, Pale Ales, and Craft Draughts available.

The microbrewery and bar are located in Mooloolaba, Queensland and is an amazing place to relax, enjoy, check out the wall art and try their beer. There is a shed in front of the bar and is called the ‘Glory Hole’ because that’s where all the glorious brewing of beer is done and you can purchase all the beer cans you wish to consume. Even if the bar is closed, you can always purchase the tins that you can carry.

Porter is a full-bodied beer and has a complex and rich flavour. There are hints of roasted coffee and chocolate among the bitterness of hops and a malty aroma. The most exquisite experience of Porter can be had when served with a rich chocolate dessert. This blend is heavenly and is considered to be a must-have if you’re visiting the Sunshine Coast region. The beer is also equally appealing when consumed with a hearty meal of lamb shank or with freshly shucked oysters.

The Sunshine Coast Brewery has a small but delicious range of craft beers that have been perfected over the past 2 decades. This has been achieved by drawing inspiration from the different traditional styles of beer from all over the world and combining it with the hinterland and coastal lifestyle of the Sunshine Coast.

The Sunshine Coast Brewery was established in 1998 and started operations by brewing the mid-strength Ginger Kegs that was an instant hit with beer enthusiasts. The brewery underwent a transformation process in the middle of 2006 under its new owners to explore traditional beer styles from around the world to promote craft beers. Within the next decade, this brewery was able to gain attention both locally and on the national stage. Today, this brewery is the longest-running micro-brewery in Queensland.

Pipeline Pale Ale is a tropical session ale, considered by some as the best pale ale available anywhere in the world. Pale Ale beer is made by balancing freshly procured and cut tropical fruits with a clean malt profile. This drink is full flavoured and has a new world character. The malts used are Pale, Crystal, and Vienna, while the hops include Mosaic, Citra, and Vic Secret.

The Pale Ale has received numerous awards and is a hot favourite of beer enthusiasts visiting the Sunshine Coast. It is a part of the core range of the 10 Toes beer. 10 Toes is a massive hopped Double IPA and is highly recommended for froth monsters. With an ingrained beer culture in the region, this beer is produced in massive quantities so that you never run out of stock even during the peak season.

10 Toes Brewery is located in Alexandra Headland, smack in the middle of the Sunshine Coast and is highly recommended for those who want to get immersed in the fresh and full flavoured local brews available on the Sunshine Coast.